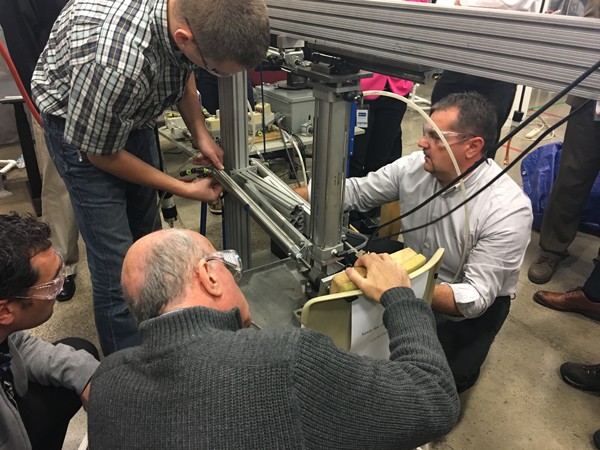 Following the Copenhagen meeting of ISO TC 136 in June this year, the first workshop was held in the USA which covered the seating tests provided in the WD 7173 document.

Before moving on to the meeting, we want to make a brief summary of the history of this document.

In 1989 ISO 7173 was published concerning the test methods, loads and cycles to test chairs. After the establishment of the CEN TC207 “Furniture” in year 2000, the EN 1728 standard was then published which arises from the ISO and is enhanced by other methods and also covers multiple seating. This remains for years the reference for the requirement standards from domestic, contract and school end-uses.

In 2012 it was finally deeply revised, becoming the only reference standard document for seating of all use, from children to the office and seating for stadiums and airports.

In 2015, this latest version of EN was therefore proposed as ISO/DIS.

After many hardships and mutual misunderstandings between the two shores of the Atlantic Ocean (US and European Countries) at the end to really understand what it is, it was decided to try "live" the various test methods listed in the document.

As for the location, the US delegation proposed the Intertek laboratory headquarters in Grand Rapids (Michigan).

In preparation for the meeting the Italian delegation (CATAS the merits) prepared a matrix in which for each test method it was listed: the purpose of the test, what intends to reproduce, the applicability, the experiences in the field and whether the methods reproduce what It takes place in reality.

The work was exhausting (four days inside a laboratory) for both matter and also for the fact that there were 30 delegates. In addition some of the tests have been equipped (as regards the equipment) at the moment, and the examination of the method did not properly went smooth. However at the end of the workshop all the evidences have been examined, with the help of some video coming directly from CATAS premises in San Giovanni al Natisone.