One year of, with and for the formaldehyde 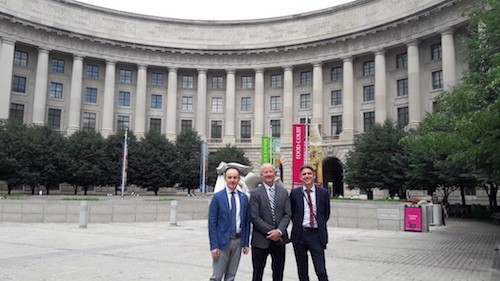 This is not the usual technical article you can find in the CATAS newsletter. But I wanted to tell you a story, which in some way has you as protagonists even if indirectly. I have been dealing with formaldehyde for almost twenty years now, first as a laboratory technician and now dealing with product certification. So it’s been a long time, but I never cease to be amazed at how things are constantly evolving and never attain any kind of real stability: in short, you never stop learning. Last year was particularly challenging: the extension to all of the United States of the CARB Californian law in the form of the TSCA Title VI law, drawn up by the US Environmental Protection Agency (EPA), is the penultimate act – I’ll tell you about the most recent piece of news shortly – and one which had me travelling around the world during the last year as I had never done before.

This is because our meetings with the other European third-party certifiers (TPC), in theory our competitors, but actually our collaborators (some even our friends!), allow us to work on common problems and to propose agreed and shared solutions to our customers throughout Europe. These collaborations are fundamental and, personally, they make me feel a little less alone: the high level of specialization in this subject makes it difficult to exchange opinions outside certain contexts. In fact, we often find ourselves wondering which of two possible solutions is the right one because, as with any good law, it is also a matter of interpretation.

So, for those who don’t know, in Europe we have the CETPC Group, which is the European TPC group. The chairman of this group is Dr. Harald Schwab of the German institute, WKI, while I have the role of secretary. The group meets once a year or when there are decisions to be taken or documents to be ratified. An example of this is the Position Paper, which is the common paper we are developing initially on the basis of the CARB, and then with the addition of the TSCA Title VI regulation. It’s a detailed document that goes back over the main concepts of the laws and defines those aspects that have not been well explained or that need interpretation.

As you can imagine, working all together on this document is not easy: and so the TG1 Task Group was established, a small group of laboratories that includes, at present, France (FCBA), Germany (EPH-IHD and WKI) and Italy (CATAS). In the future, Spain (AIDIMME ) should be added. I am responsible for this group and our journey starts here.

In the middle of these trips there is also time for my auditing work as an inspector, my main job! 43 samplings were carried out in Italy, 3 new CARB/TSCA certifications in 2018 including one issued in May in favour of an Italian-owned factory in Hungary, and the usual quarterly visit to a certified plant in Turkey. In addition, two CARB-NAF certifications (No-Added Formaldehyde based resin) have been issued, one an initial audit and the other a renewal.

At the time of writing, there are still 2 audits to carry out, one quarterly audit and one initial audit: our test rooms don’t celebrate Christmas!

In short, a full year and it doesn’t look like the one that’s just started is going to be any easier!: the latest news from Germany will also have an impact on the Italian market, although I still have to get to grips with that because it was only published on 26 November 2018. But, fear not, I’ll write a technical article on that specific topic and make it available on our website.

Now I'm going to go and put my suitcase down. Until next time.